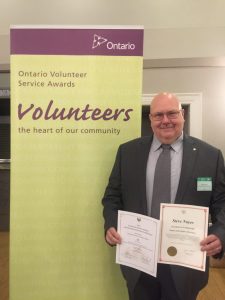 On Tuesday, October 29, Steve Noyes, OBIA’s I.T. Coordinator received the Volunteer Service Award from the Province of Ontario in recognition of his 10 years of service to our organization.

Ruth Wilcock, OBIA Executive Director, shared the following in her letter of support for Steve’s nomination:

Mr. Noyes is an exceptional person whose life is a testimony of tragedy to triumph. Mr. Noyes was at the height of his career as Director of Information and Communication Technologies at Mount Sinai Hospital in Toronto. He was responsible for a staff of over 80 and was a consultant to the Ministry of Health. Steve’s life was changed in an instant when he was hit by a bus and sustained a severe brain injury. As a result of the catastrophic nature of his injury he was unable to return to work given his high level position.

Steve’s rehabilitation team approached OBIA and asked if Steve could volunteer and assist us in any way. We affectionately called him “Mr. Suit and Tie” as he took his volunteer position as serious as his previous employment at the hospital and dressed accordingly.

Steve’s first day was over 10 years ago and in his volunteering he has become invaluable to OBIA, while at the same time his volunteer position has once again given him meaning and purpose.

Steve is very dedicated and is at the office five days a week. The growth in Steve’s ability over the years has grown considerably, and is now our I. T. Coordinator. He assists with everything from ordering equipment, to setting up our computer systems, to negotiating contracts relating to I.T. His rehab support worker is also at our office every day to assist Steve and keep him on track with his tasks.

Steve not only contributes in the area of I.T. but also in bringing awareness to brain injury and the impact on family. Through various presentations Steve has represented OBIA including, speaking to the Standing Committee on Finance and Economic Affairs for input on the study of the auto insurance industry’s practices and trends as it relates to brain injury.

We regularly thank and give appreciation to Steve for his volunteer commitment to OBIA, however, given the amount of time, energy and support he provides our thank you sometimes feels like it falls short.

I cannot think of a better way to truly honour Steve for his volunteer services than having him receive the Ontario Volunteer Service Award.

Congratulations Steve from all of us here at OBIA! 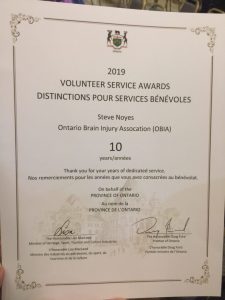 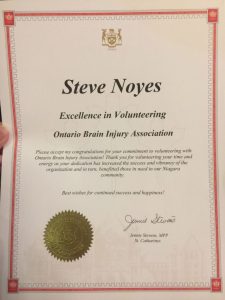